i. Gnd' Wire Modification (Relay nr. 5 (Horn)): My first modification was to replace the two [joined] purple wires with a black (gnd). This is to provide the required gnd [switch return] for the relay.

The original configured [2x purple wires] was looped from terminal 30 (12v live) back into terminal 86 (gnd), so these needed to be replaced with a gnd [return] for the horn to work. The [new] gnd feed was a direct spur from the gnd bus. 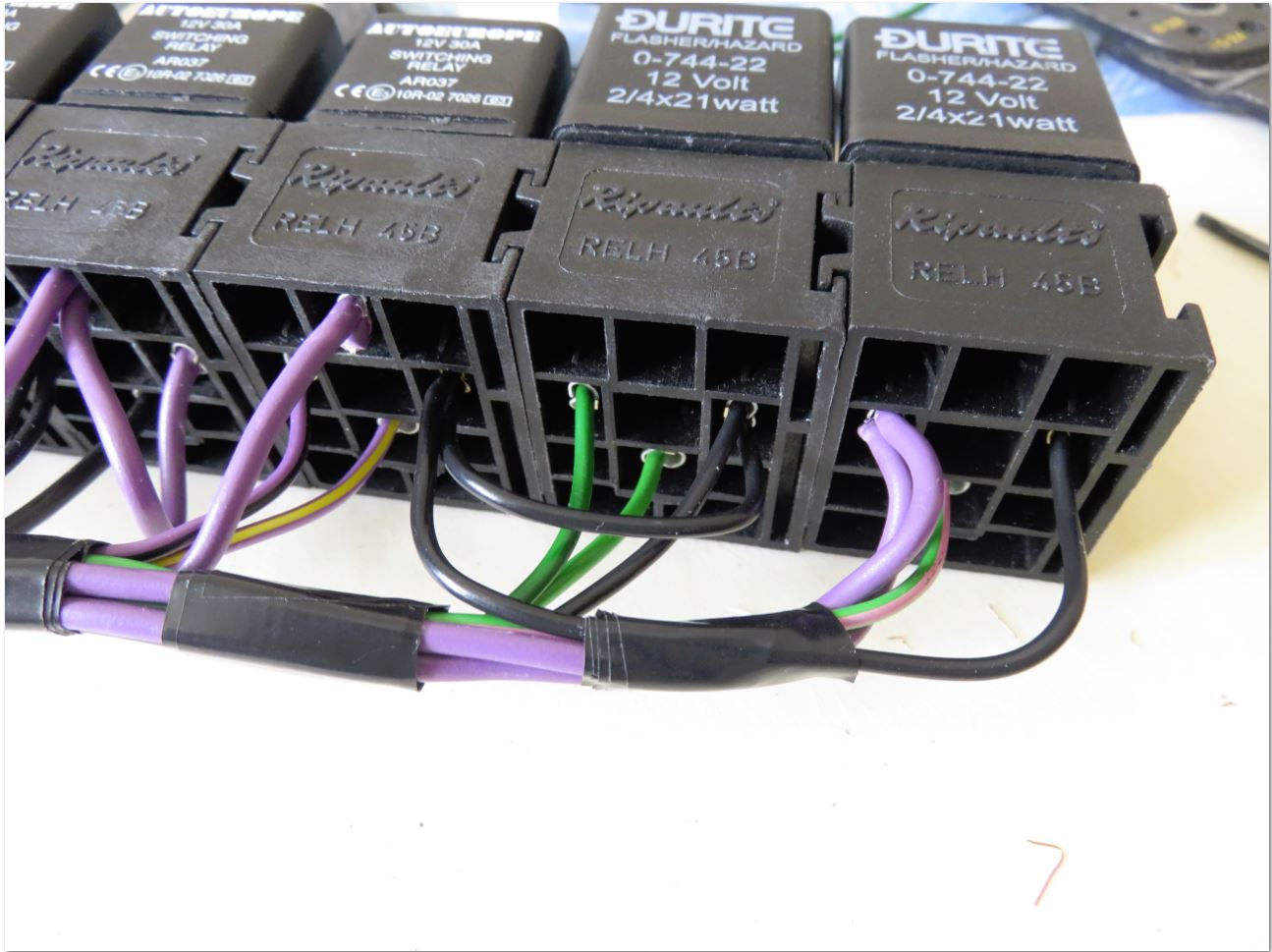 1. ECU Fan Control: I modified the GD fan relay wiring (relay nr. 4) by replacing the black/green (85) with the MSD ECU fan control gnd wire (the pink wire.) The ECU takes care of the fan operation as it has the feed from the water temperature sender.

There is also a facility to control a second fan or a booster capability from within the ECU, so everything is in place for future tinkering...

Note: Some additional detail on my fan fuse move… When running the engine (pre-IVA), I noticed the fan fuse was getting quite warm and was occasionally blowing when the fan kicked in (i.e. the initial power surge); so after doing some 5 Amp [within spec] incremental experiments to determine when the fuse didn't blow and remained cool, it appeared I needed to upgrade to a 30 Amp fuse.

iii. Windscreen Washer Pump: The washer pump was originally configured as a 'switched earth'. With the Vectra steering column, this becomes a 'switched live' so the green wire needed to be replaced with a gnd. Took the earth (gnd) from an unused gnd from the dash loom (L7).

iv. Accessory Power Outlets: I needed a couple of accessory power outlets. One for my phone and Satnav (a 2x USB unit), and one for my tyre pump (12v cigarette type). So one USB unit on the driver's side and one 12v cigarette type on the passengers' side was the order of the day.

The ideal places for these are bolted to the underside of the dash' trays, just by each side of the tunnel, tucked up behind the air vents. This keeps them within easy reach but out of the way of anything... Didn't want these on the dash's front as they would spoil the look.

Power feeds are from a couple of unused dash loom spurs (L18, and L20) via their individual fuses.

Wire-up options are: to drill holes in the doorframe and put pressure button switches in or have a couple of hidden micro-switches which would activate and deactivate the lights by the movement of the hinge when the door was opened or closed.

Heater Fan Third Speed: The GD looms facilitates two fan speeds. These are via plugs L22 and C on the dash' loom, and plugs 14 M and C on the main loom… So I needed to get power and control to the ‘max’ terminal on the fan unit.

Specifically: Ran a wire from the Orange terminal on the fan unit to the third position on a three-position switch… I used the same cable rating and [orange] colour scheme to continue the existing specification from the heater plug to the switch. Essentially, the new wire does what it is supposed to do with respect to the 3-position switch and the 3-speed fan. The other loom cabling takes care of the existing i.e. power, gnd and fan speed 1 & 2. 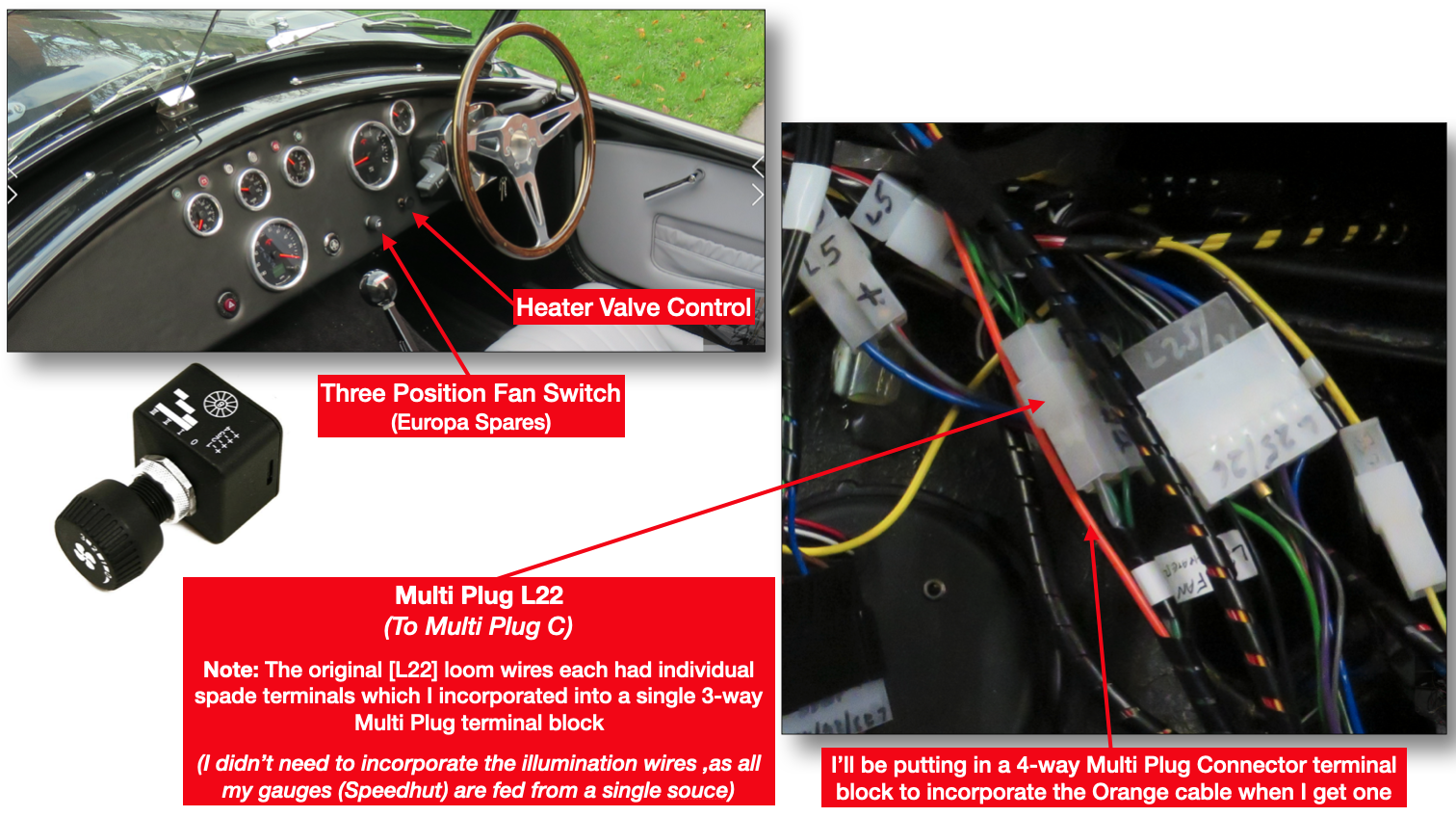 Air Vent Butterfly Valve: To complement the heater motor speed modification I made a manually operated butterfly vent to cut off the airflow to the windscreen outlets. A bit of plastic pipe, a couple of sacrificial bolts, lots of filing and fettling, and a control cable from CBS.

Very pleased with the outcome, and because I didn't want to clutter up the dashboard configuration I mounted the control knob on the undertray just to the right of the driver's knee... 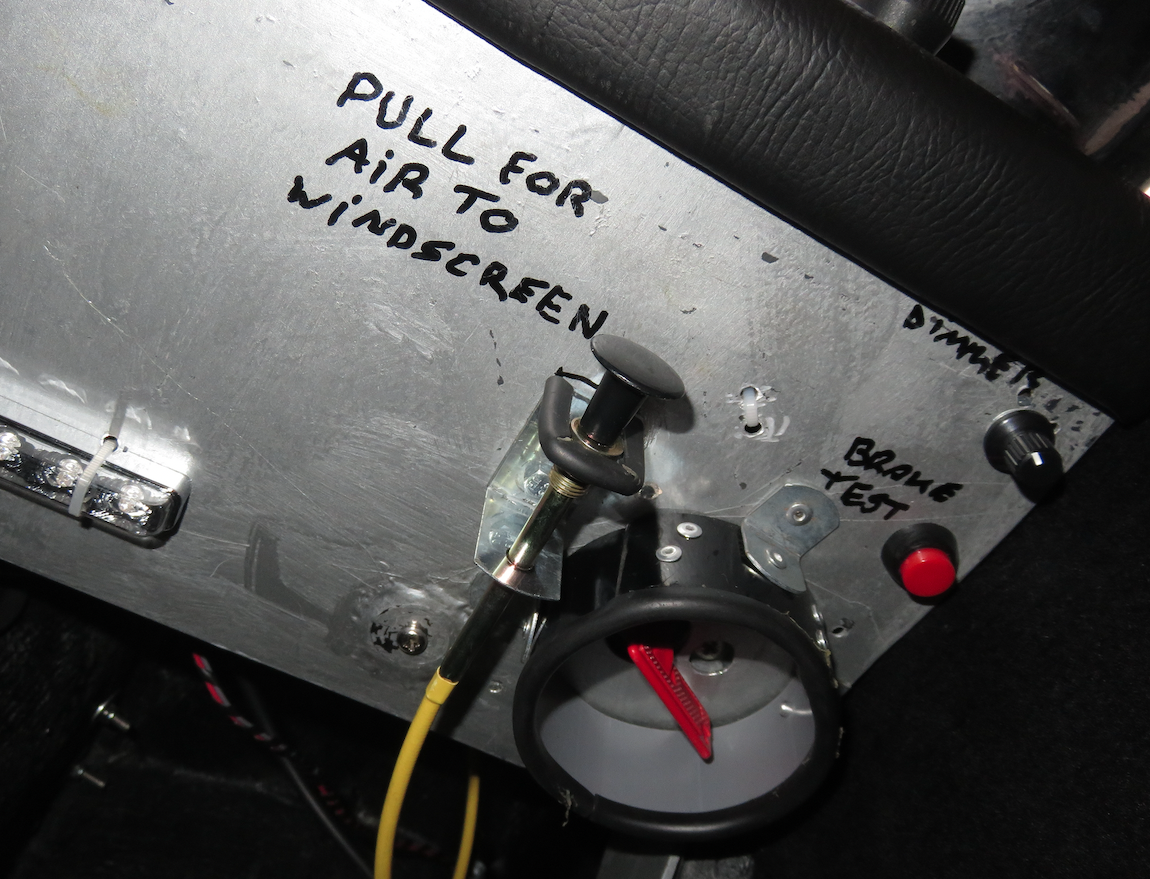 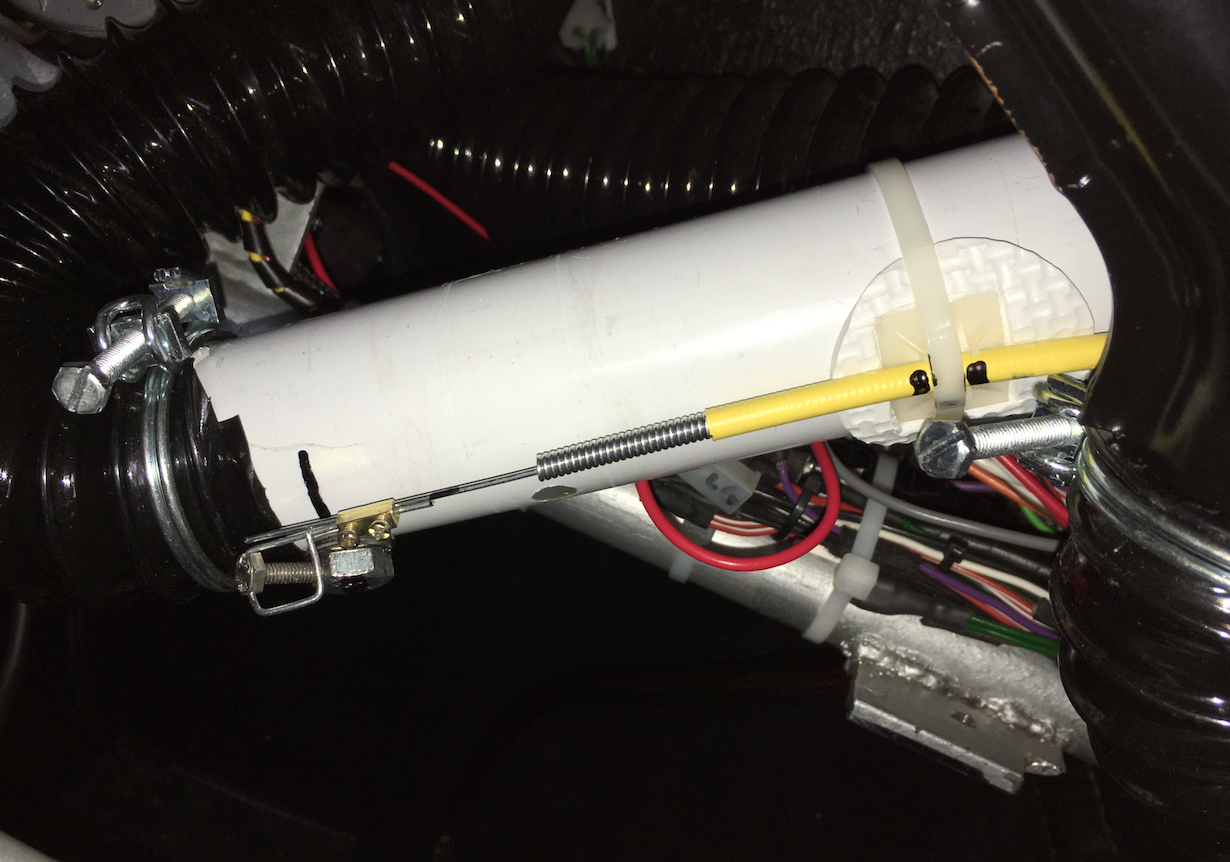 vii. Handbrake Warning Light: This is enabled via a microswitch mounted on the handbrake mechanism. 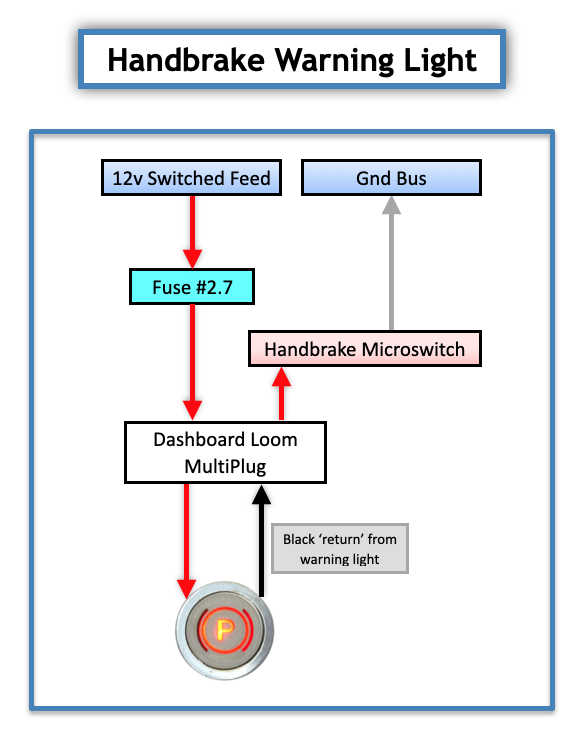 And the microswitch and spring steel actuator

(which is an old steel ruler cut and bent to shape)

viii. Sidelight Bulb Upgrade (Post IVA): Replaced the supplied 'Capless' sidelight bulbs for LEDs. Did this because the standard bulb takes 5w and an LED takes 0.37w, giving a whiter and brighter light.

(Yes this comparison is the sidelights)

And yes, I could’ve wired it up directly, but that would've been too easy; and no, I can’t blame the resident garage Imp on this one as I’ve been pondering this mod’ for a while…

So why do I want to do this? I want to do this because I don’t want to lug around a phone ‘Juice Pack’ [which I don’t have] when at shows or when running low and can’t top up without having the accessories circuit active i.e. key in and ign on (in my case).

I opted for a Single Pole Dual Throw (SPDT) switch to feed the 12v accessory outlet from two separate power sources… I ruled out the Double Pole Double Throw (DPDT) option as that was a whole extra world of brain strain that I wasn’t prepared to take on. But… [there’s always a but], what I needed to do was kinda’ reverse of how an SPDT switch is usually wired up… i.e. Instead of one power feed energising two separate accessories (depending on the switch position (I or II)), I’d be feeding a single accessory from two independent 12v power feeds.

The way I see it is like this… Theoretically, it shouldn’t matter which way the power and load are wired up as, in this case, 12v is 12v no matter which direction it's flowing. My wire-up configuration is essentially the same as the proper way to wire up an SPDT switch but reversed.

All in all, this was a relatively straightforward modification and one that will be very useful. 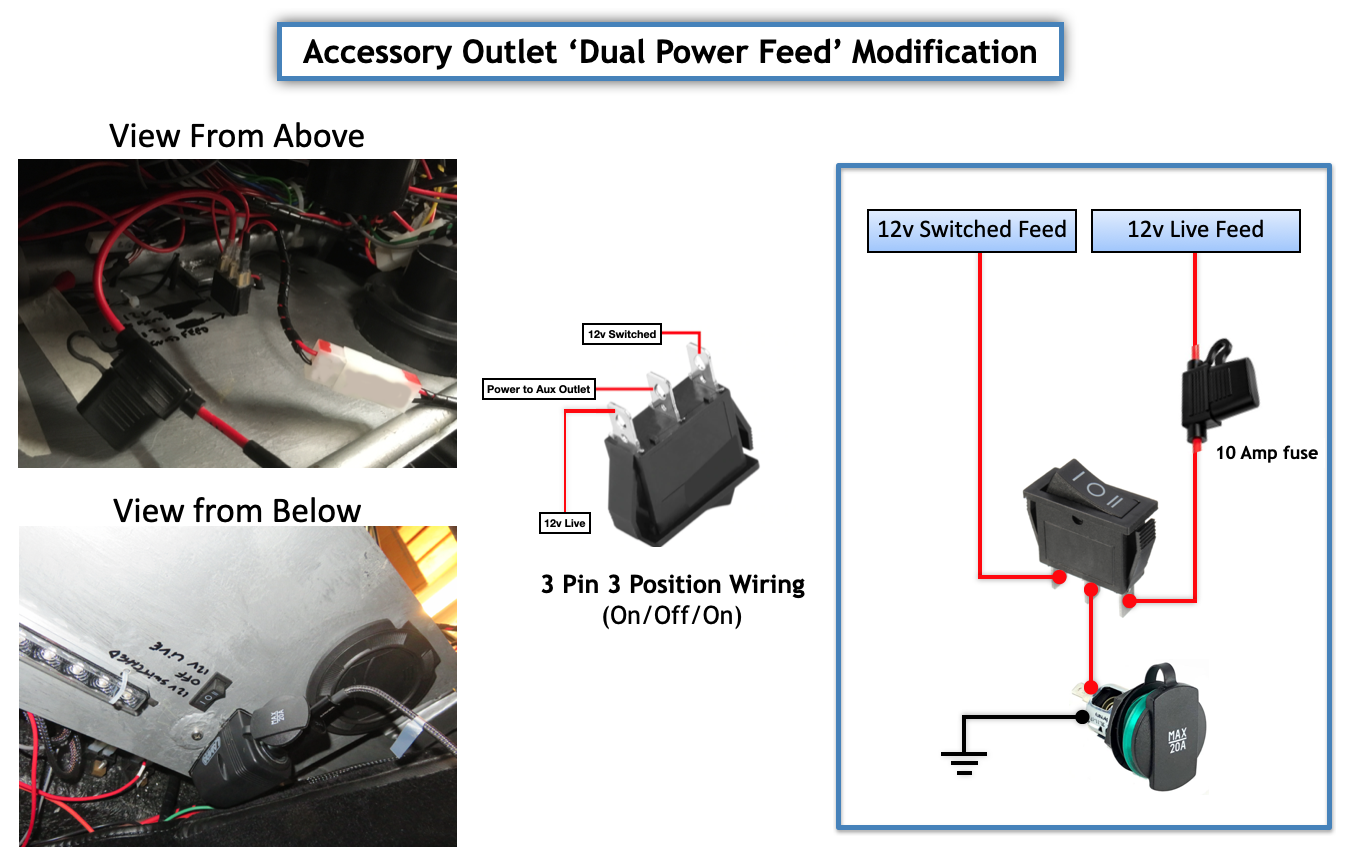 x. Combined L&R Indicator Warning Light: I noticed when at some roundabouts and junctions my self-cancelling indicators occasionally wouldn’t self-cancel…

No great issue on this one as this sometimes happens in the tin-top. However, as it’s a tad noisier in the Cobra, and somewhat brighter, a.) I might not hear the click of the indicator relay, and b.) the L&R LED indicator warning lights are not in my line of sight, so I sometimes miss these flashing away merrily in the fresh air. So to mitigate this condition I’ve put in an additional single [combined L&R] indicator warning light, and placed it within my forward periphery vision.

Had to be careful on this one as I didn’t want too big a warning light as that would’ve been the elephant-in-the-room of my dash configuration; so one of those CBS green mini warning lights and a metre each of Green/Red and Green/White cable to extend the L&R L9 and L16 power feeds on the dash’ loom, and a couple of CBS diodes was all that was needed to make this modification.

I also polished up an M8 washer to function as a supplemental bezel because the bezel lip on the mini LED is only ~1mm wide and is no way wide enough to grab onto the dash covering lip without slipping under. I also epoxied a larger washer on the back of the dashboard to better support the bulb retaining nut as the brittle GRP edge [on the smaller diameter stuff] can tend to flake and crumble under pressure or vibration.

xi. Brake Warning Test Feature: This is enabled via a red 'press' button on the driver-side dashboard undertray. Spurred the wires from the main reservoir float circuit, so when the button is pressed the brake warning light comes on.